One of the key areas of focus in public health is food safety, because it affects people of every age, race, gender, and income level around the world. Rapidly advancing technology and globalization continue to have significant impacts on food safety, both positive and negative. Here are four of the most significant issues in food safety in 2015.

The European Food Safety Authority (EFSA) Journal released two studies in 2015 related to the risks posed by the presence of industrial chemicals in food. The European Commission asked EFSA to assess therisks associated with chlorate, which is a byproduct of chemicals like chlorine, chlorine dioxide, or hypochlorite that may be used to disinfect drinking water and food preparation surfaces.

EFSA also issued areport about bisphenol A(BPA), a chemical used in the production of water bottles and other food and beverage packaging. Research into theeffects of BPAis ongoing, but many individual countries have restricted its use, particularly in packaging for foods and beverages intended for consumption by young children.

There have been severalfood recalls related to Listeria monocytogenesin the U.S. this year. As CNN explains, listeria is a bacterium that can be found in raw meats, produce, and unpasteurized dairy products. It is resistant to moderate heat and cold, so it can survive in a refrigerator. Listeriosis symptoms are similar to those of influenza, but the illness can be dangerous to infants, the elderly, pregnant women, and anyone with a compromised immune system.

New Controls From the U.S. Food and Drug Administration 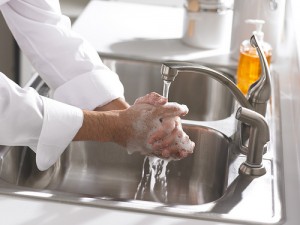 The FDA calls the Food Safety Modernization Act(FSMA) “the most sweeping reform of our food safety laws in more than 70 years.” President Obama signed the act in 2011, but it has taken four years to finalize the Preventive Controls for Human Food and Preventive Controls for Animal Food rules, following a comprehensive outreach effort.

One of theobjectives of FSMAis to shift American food safety policy away from reaction and toward prevention of contamination. Experts hope the new rules will reduce instances of listeria, salmonella, and other outbreaks that can lead to large product recalls and health risks.

The Department of Agriculture reports thatthe U.S. imported about $109,465,900 worth of food in 2013. The FSMA regulates imported foods, butenforcement can be challenging. In March 2015 Forbes contributor John Balzano wrote about China’s efforts to update national food safety standards, while the World Health Organization (WHO) focused onglobal food safety. In an increasingly global trade economy, food safety is an international issue, and one that will likely be in the spotlight for years to come.

Forpublic health professionalswith an interest in food safety, 2015 brings significant developments and challenges. As new regulations take effect in the U.S. and abroad, the public health community will watch carefully to see whether they have the desired effect of improving global food safety.