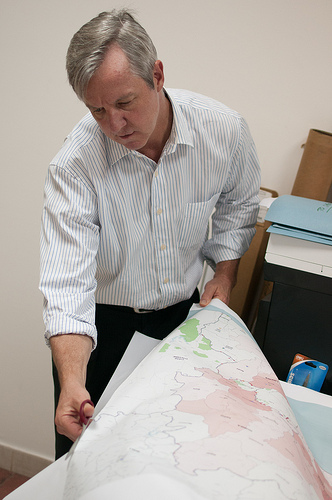 Throughout the U.S. and the world, tracking the prevalence of health campaigns and the spread of diseases is an important part of managing public health. For professionals with aMaster of Public Health (MPH) degree, understanding the spread of diseases and the reach of public health efforts is vital. Learn about five instances where maps proved critical to tracking and treating illnesses and health issues.

Tracking the spread of Ebola throughout 2014 and 2015 has been important for both treatments as well as accurate reporting. Since Ebola is a highly communicable disease that can spread quickly, the BBC shows that carefully mapping Ebola cases has been critical to containing and understanding the disease. Although the isolated cases in the U.S. garnered significant media attention, maps produced by the World Health Organization (WHO) show that Liberia was the country most affected by the outbreak, with nearly 5,000 Ebola-related deaths, according to the BBC.

During each influenza season, the Centers for Disease Control and Prevention (CDC) tracks reported cases of the flu throughout the U.S. While this information, available through FluView on the CDC website, helps the agency collect flu-related data and advise local agencies about measures to contain the virus or prepare health care centers for an influx of patients, the details are also available to the public. By referring to the weekly flu maps throughout the fall and spring, people can easily see whether their hometowns or locations where they plan to travel are experiencing an outbreak. With this information, people can better prepare themselves to deal with the flu.

Although Salmonella and most other foodborne outbreaks can be confined to a single U.S. state, as the CDC’s work indicates, the origin can still be difficult to track. Stopping the outbreak by locating the affected food as quickly as possible is important, as the CDC often relies on maps to monitor the pattern of reported cases. By using maps to track Salmonella cases, also available on the CDC website, the CDC can better inform the public and local health care practitioners about illness location and distribution of the affected food.

West Nile virus has affected U.S. citizens since 1999 and can be a difficult illness to manage since the disease often doesn’t bear symptoms, according to the National Institutes of Health (NIH). If West Nile virus escalates, however, patients can develop encephalitis or even meningitis, both life-threatening conditions. Since the virus spreads through mosquito bites, HealthMap.org shows that mapping West Nile virus cases a helpful way to inform public health authorities about local cases and help citizens avoid potential contact with this virus.

Smoking can lead to a number of illnesses, including emphysema, bronchitis, and lung cancer. The WHO has prioritized tracking efforts to curb smoking and its effects worldwide, creating many publicly available maps. These maps reveal details from countries with smoke-free environments and the prevalence of bans on tobacco advertisements to the tax rates on tobacco worldwide. Together, these maps inform public health professionals about tobacco- and smoking-related issues worldwide.

Regardless of your position in the public health sector, maps can provide vital information. From informing the public of communicable illnesses to tracking the spread of diseases, maps are a critical public health tool.