Natural disasters decimate local communities and can create a ripple effect among neighboring cities and states. Often, the state government finds itself unable to handle the overwhelming task of disaster response. The Federal Emergency Management Agency (FEMA) is dedicated to helping with the burden of disaster response with a range of services, from housing assistance to public health concerns.

In recent years, FEMA has responded to a number of catastrophes that have captured the public’s attention, leading to discussions of how disaster responses are organized and what services are provided. FEMA’s response depends on the severity of the situation, but understanding FEMA’s role in emergency management is important for every citizen, in case the next disaster happens nearby.

When disaster strikes, FEMA is not immediately dispatched to the location. First, a state of emergency must be declared, followed by a request for assistance. This allows states the ability to assess the outcome before calling in federal aid. If the state is unable to respond adequately to the disaster, or the financial burden is too great, they can request FEMA aid, which is approved by the president, according to FEMA.gov.

In the case of major disasters, FEMA is often called in quickly to help expedite the process of recovery. Requests can be processed and approved in under 24 hours, and FEMA is often on standby when the governor declares a state of emergency. For example, during the Montana wildfires of 2017, FEMA aid in the form of their Fire Management Assistance Program was approved the same day the fire was deemed dangerous.

A state of emergency can be declared before disaster strikes, such as in instances of hurricanes, where the disaster can be anticipated and tracked. Texas declared a state of emergency days before Hurricane Harvey made landfall 2017. According to a statement by Governor Abbot, as reported by the Office of the Texas Governor, “preemptively declaring a state of disaster will allow Texas to quickly deploy resources for the emergency response effort in anticipation of the storm’s hazardous conditions.”

FEMA was called into action two days after the state of emergency was declared, and a 24/7 response team was assembled immediately to help mitigate the effects of the disaster. The agency positioned resources such as food and water in critical locations, according to Brian Naylor of NPR, making it easier for citizens to access then after the storm abated.

The projected cost of FEMA aid to the victims of Hurricane Harvey is close to $180 billion dollars, reports Naylor. The FEMA website states that FEMA and the federal government handle 75 percent of that cost, significantly relieving the financial burden placed on the state.

That project cost covers multiple aid services. Housing assistance and recuperation funds are often the most reported on, and health resources are among some of the most important aid services offered by FEMA.

After a disaster, hospitals and other medical facilities may be incapacitated. Public health officials help to coordinate efforts to address “medical needs and other functional needs of those in need of medical care, including assistance or support in maintaining independence, communicating, using transportation, and/or requiring supervision”, according to the Department of Health and Human Services.

In the instance of Hurricane Harvey, Vann R Newkirk II of The Atlantic reported that “hospitals faced critical shortages of food and medicine, people with serious chronic diseases had to make difficult decisions between evacuation and sheltering in place, and hundreds of victims faced prescription shortages and mental-health issues” during the worst of the storm. Addressing these issues is no small feat, but Newkirk II stated that the coordination between FEMA and the U.S. Public Health Service Commissioned Corps has helped to begin the process of re-stabilizing the region. 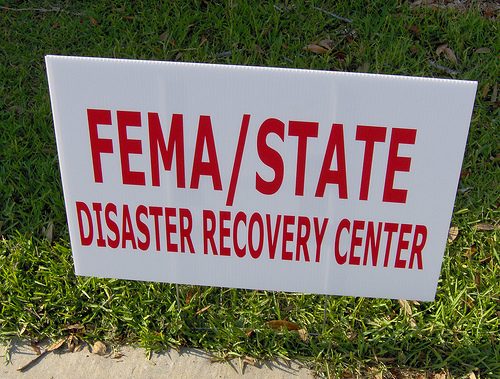 Once an area has been stabilized, FEMA’s work is far from over. Financial assistance is available for families whose homes are no longer safe to return to, even if they have insurance. According to the FEMA page on Hurricane Harvey, grants are available to cover specific health issues, such as dental, medical, or childcare expenses that were incurred due to the storm.

Besides utilizing FEMA workers after the storm abates, FEMA encourages community-level involvement through their Community Emergency Response Team, or CERT, program. This program allows non-FEMA personnel to access FEMA training to better help their community in times of disaster, according to the CERT website. Citizens with training in public health are especially encouraged to become CERT-certified to help get their community back on their feet and assist with the reorganizing of the medical infrastructure.

Recovery and rebuilding is often a long, exhaustive process, but FEMA is dedicated to providing ongoing support for communities, especially in the face of potential health crises. In an interview with Newkirk II, the dean of the National School of Tropical Medicine at the Baylor College of Medicine, Peter Hotez, stated that two long-term health problems may arise post-Harvey: mold and mosquitoes.

Many houses were flooded, but some only received slight water damage. Even with manageable water exposure, mold can still flourish in those spaces, and FEMA and its related health organizations are working to educate citizens on how to spot mold. Mosquitos are a more nefarious issue, since their numbers are not easily managed, and they can carry diseases such as West Nile virus and dengue fever. Even after the affected areas’ infrastructures are rebuilt, these health issues can continue to plague citizens, making public health one of the biggest areas of concern for FEMA recovery efforts.

Public health officials are an integral part of disaster recovery. Training in the public health field is an invaluable resource when community members are looking for guidance on how to care for loved ones or what steps they should take after a disaster passes. For those looking learn more about public health policy, coordinated response to disasters, and working with the public, the online Master of Public Health program at Keck School of Medicine can enable today’s  students to become tomorrow’s leaders in the field.