A growing number of people, particularity in the college level age group, are choosing to vape. Vaping is growing in popularity both because of the addictive nature of the substances people place inside e-cigarettes and because of the fun flavoring that is used in these products. Yet more and more health officials are expressing concern about vaping after a rash of people who have become ill or even died due to this pastime. In fact, in November 2019, President Trump announced plans to ban flavored vaping products in an effort to stem this growing problem. Is vaping a serious health risk, and is this a risk worth being concerned about?

Here is a closer look at why vaping is concerning, and what is being done to protect the public from this risk: 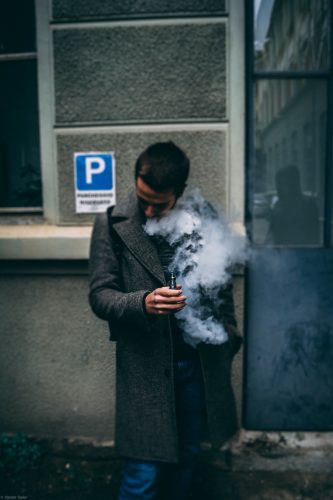 Photo by Ciprian Tudor on Unsplash

Photo by Ciprian Tudor on Unsplash

Before looking at the health risks of vaping, it’s important to understand what it is and why it is a growing public health concern.

Vaping uses battery-powered devices called e-cigarettes have specially designed cartridges that contain nicotine, flavorings and other chemicals. The device turns these into vapor, which the user inhales in order to experience the effects of the nicotine, rather than smoking it through a traditional cigarette.

Vaping creates no smoke and does not stain the teeth or fingers like cigarettes do, makes it highly popular with young people who crave the nicotine but do not want the stigma of traditional smoking. Unfortunately, vaping comes with serious risk, and public health officials are just now starting to understand the magnitude of that risk.

The Rise in Popularity of Vaping

Vaping has been on the market in the United States for about 10 years. Across the globe, the number of people vaping is growing exponentially. In 2011, the estimated number of “vapers” was about 7 million. In 2018, it had grown to 41 million. Estimates indicate it could be 55 million by 2021. The industry is now estimated to be wroth $19.3 billion, and again this number is growing.

A False Promise of a “Safer” Cigarette

E-cigarettes have risen in popularity in recent years because they deliver less nicotine than cigarettes, and thus are considered a safer option. In addition, e-cigarettes do not create secondhand smoke, a serious issue with smoking that puts those around the smoker at risk for health problems. Both of these facts have caused many to consider the e-cigarette a “safer” option. Some have even considered using these devices to help them break the habit of smoking. However, research is finding these are not actually a safer cigarette. In fact, e-cigarettes are causing several concerning health risks as their use continues to grow. Here is a closer look at some of those.

Vaping Serves as a Gateway to Cigarette Use

For many who choose to vape, the thought is that they can enjoy the high from nicotine without the risks of smoking, especially the risk from second-hand smoke. In addition, the lower entry-level nicotine strengths popular with teens can give the false impression that there is less risk with vaping than with traditional smoking, which provides less control. Unfortunately, studies have shown that vaping as a teenager increases the likelihood of using other nicotine products later in life, including cigarettes.

In one 2017 USC study in particular, students who reported using high-nicotine e-cigarettes at the start of the study had begun smoking traditional cigarettes by the end of the six month time frame. The researchers concluded that e-cigarette liquids in concentrations of 18 mg/mL or higher would increase the use of regular cigarettes in the future. Specifically, 43 percent of high school students who vaped these high-nicotine cartridges at the start of the study had become frequent smokers by the six month mark. Based on this and other studies, the supposed benefit of vaping to avoid cigarette use may be null and void.

Vaping Does Not Encourage Cessation of Smoking

Vaping Is Causing an Outbreak of Lung Injuries

What is more concerning than this is the fact that vaping appears to cause serious lung injury. Many people who vape have fallen victim to respiratory illnesses that are not due to infection. People who use e-cigarettes often report problems like:

These symptoms are often mistaken for the flu or pneumonia. In addition, many patterns present with chemical burns on their lungs.

As of the fall of 2019, over 2,050 people have had official illness due to vaping reported to the CDC, and all states except Alaska have had cases of vaping lung illness or injuries. These numbers continues to grow. Many of those with reported injuries had to be hospitalized for their illness, and 80 percent of those who were hospitalized were younger than 35.

Clearly, lung injury due to vaping is a growing problem, and one that is affecting younger people more than older.

Vaping is Linked to Several Deaths

More concerning than smoking trends is the rise in vaping-related lung injuries and illnesses in recent years. Many of those who have died were young adults. In October of 2019, a 17-year-old boy in Bronx, New York, died. The official cause of death was a vaping-related lung illness. This was the first teenager in the country to die due to vaping, and the boy was added to a growing list of 23 people killed because of vaping, with many more deaths under investigation.

Many states are now issuing public health advisories about vaping and e-cigarettes in light of these deaths. In Georgia, Governor Brian Kemp issued one such warning after two confirmed deaths in his state. In the Georgia deaths, both patients developed pneumonia, which lead to their deaths, yet had no signs of infectious disease. The deaths, therefore, were linked to their vaping habits.

Another reason that vaping is becoming a public health crisis is the unknown long-term effects of the habit. Over 2,000 illnesses may seem like a small number compared to the number of people who have died from smoking related illnesses, but e-cigarettes are a relatively new product. Since they have only been on the market for around 10 years in America, long-term studies as to their potential risks are not yet in the books. No one has studied people who have used e-cigarettes for several decades to determine whether or not this product will affect the cardiovascular or pulmonary systems long-term or cause cancer.

Vaping Is a Health Crisis, and the Solution is Not Clear

One thing is clear: vaping is making people sick and even leading to death. It is a habit that is trapping many young people into a cycle of addiction. It appears, on the surface, to be a “cleaner” way to take in nicotine, yet it has health risks that are both known and unknown. As a result, vaping is a clear public health risk, and an increasing number of public health officials are taking it upon themselves to speak out against e-cigarettes.

Vaping is one of several serious issues facing public health officials today. If you are interested in issues like this one, a public health online degree is an excellent way to enter the field. The Keck School of Medicine at the University of Southern California offers the only online Master of Public Health degree that is certified by a top-ranked medical school.

Understanding the Implications of Vaping and E-Cigarettes

Outbreak of Lung Injury Associated with the Use of E-Cigarette, or Vaping, Products

Is Vaping-Linked Illness a Public Health Crisis? That Depends on Who You Ask

Vaping: How Popular Are E-Cigarettes

Before Recent Outbreak, Vaping Was on the Rise in U.S., Especially Among Young People

President Trump’s Vaping Ban to be Released this Week