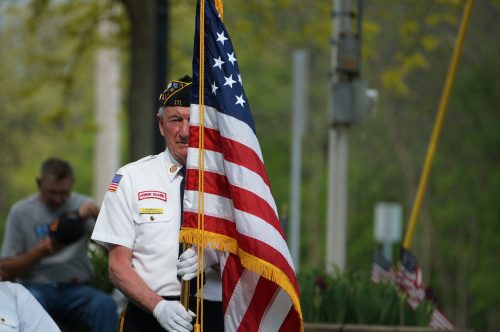 Todd Vance is a U.S. Army and U.S. Special Forces veteran, with six years of deployment under his belt. He defended his country and earned an honorable discharge, but his fight was far from over. Diagnosed with PTSD, Vance has turned to a new cause: helping other veterans battle PTSD and overcome obstacles such as homelessness and difficulty re-assimilating.

According to a study by RAND, a minimum of 20 percent of returning veterans who served in Iraq or Afghanistan has PTSD. This number becomes even more staggering when the number of returning veterans is taken into consideration: as of Fall 2014, approximately 2.7 million veterans had returned to the United States. This means roughly 5.4 million U.S. veterans were actively suffering from PTSD, and that number is likely to have increased since 2014.

Of those veterans diagnosed with PTSD, only 50 percent seek treatment, RAND’s study shows, and of that number, a further 50 percent receive only “minimally adequate” care. Many veterans with PTSD turn to alternative means of coping, which can include substance abuse and other dangerous behaviors.

Homelessness among veterans has reached crisis levels — the U.S. Department of Housing and Urban Development estimates that roughly 40,000 veterans are “homeless any given night,” while the National Coalition for Homeless Veterans states that around 1.4 million other veterans “are considered at risk of homelessness due to poverty, lack of support networks, and dismal living conditions.”

Vance was one of the 5.4 million Americans suffering from PTSD. In an interview with CNN‘s Natalie Angley, he describes difficulty with drinking and abusing prescriptions given to him by the VA to help him cope with the daily struggles of PTSD.

When it became clear that this path was putting him in danger of losing his family, Vance took proactive steps toward change. He enrolled in school and began attending therapy. However, his real breakthrough came when he resumed practicing mixed martial arts (MMA).

MMA had been his favorite sport in high school, according to an interview with Men’s Health‘s Alisa Hrustic. He threw himself into the sport and soon began seeing remarkable effects. In the Men’s Health interview, he states, “Before training, I had no reason not to drink until 3:00 in the morning. I was training six days a week, often two times a day, and eating clean.” Also citing the structure that was a part of his military career, Vance soon began to thrive.

Healing himself wasn’t enough for Vance, who saw real promise with his progress. He turned to San Diego’s Aspire Center, a VA-backed program, which gave him its support. In 2012, according to CNN, Vance quickly restructured the group, initially a veteran competition team, to turn it into a non-profit known as P.O.W. (Pugilistic Offensive Warrior Tactics).

Vice’s Justin Staple explains that the program is held in Vance’s gym, and offers 14 classes per month, free for veterans. Vance is the coach for the program, but he offers veterans something much more than physical exercise. NPR describes it as a peer support group. Veterans attending Vance’s gym are a part of a network that works together to overcome obstacles, both mental and physical.

By 2017, Vance’s program has already touched the lives of 275 veterans, according to CNN’s Natalie Angley, but P.O.W.’s website breaks down those numbers even further. P.O.W. conducted a survey of program participants, in which an incredible 90 percent of the participants reported “an improvement in physical health,” 80 percent reported “improved ability to cope with stress and symptoms of PTSD,” and 79 percent reported “decreases in feelings of despondency, helplessness, and/or anger.”

While these are not independent study results, the number of test cases that support these figures more than prove the point, according to Justin Staples of Vice. While Vance’s program certainly focuses on the physical, it doesn’t overlook the mental.

In the Vice interview, Vance stated: “If you want to help a veteran, give them an opportunity, a kick in the butt. This isn’t a program holding their hand into assimilation, this is them doing it themselves, and it has been successful time and time again.” As a member of the population he is serving, Vance has been able to curate a program that addresses the multifaceted and complex needs of returning veterans, creating a program that is not only focused on the end result, but on the process as well.

It would be reductive to describe Vance’s program as simply an MMA group. There are also several pro bono services offered through P.O.W. that are listed on the group’s website, including a certified fitness trainer and sports injury specialist, volunteer legal counsel, and insurance assistance. According to the website and Alisa Hrustic of Men’s Health, the program also offers peer-to-peer coaching, counseling, and stress-reducing yoga practices to bring the mindfulness focus full circle.

The peer-to-peer coaching is an essential part of the group’s reintegration effort. Newly returning veterans can get advice from re-assimilated veterans, which is imperative when attempting to adjust to a new standard of normal. Counseling is also available for veterans, a service considered invaluable by Vance, who returned to school to get his Master’s in Social Work to help him prepare to run P.O.W.

Vance hopes to expand the P.O.W. program nationwide, with gyms at all major veteran hubs. The program is closely connected with the previously mentioned Aspire Center, which works with imminently or currently homeless veterans. The missions of the two non-profits are closely aligned, allowing the programs to assist and support one another.

The world needs more people like Vance to forge ahead and make a difference, a process that begins with knowledge. An online public health master’s program can arm students with the necessary skills to tackle public health issues, such as PTSD, head on. Visit the Keck School of Medicine of University of Southern California to learn more and start on a journey to improve public health.
Sources: