The 3 Most Important Vaccines in 2015

According to one Business Insider article, vaccines have numerous vital benefits. Each year, they save tens of thousands of children’s lives. They also help to eliminate diseases and can prevent chronic diseases. By preventing disease, vaccines save billions of dollars every year in health care costs, especially since preventing disease is better for people than merely treating diseases. Vaccines clearly play a large role in today’s society, but the most important vaccines can change from year to year. Public health officials, students of public health, as well as people in general can benefit from knowing which vaccines are in the spotlight for 2015. 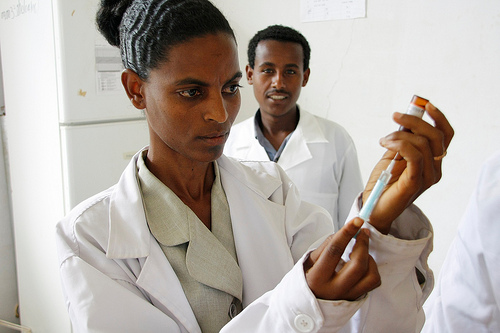 Image via Flickr by DFID – UK Department for International Development According to the College of Physicians of Philadelphia, “In the United States, ongoing measles transmission was declared eliminated in 2000.” Despite that accomplishment, the disease still exists in the U.S. The College of Physicians of Philadelphia goes on to note that most cases in the country come from people who contract the disease while traveling outside the U.S. The most recent measles outbreak occurred earlier in 2015 and is thought to have started at an amusement park in California, the CDC reports. Since the start of the outbreak several months ago, measles has worked its way into 24 states and has affected almost 200 people. It seems that even though the means for preventing measles exist, the vaccine is underutilized.

Each year, news reports comment on flu vaccinations and provide reminders for at-risk groups to get vaccinated before flu season starts. According to the CDC, “Everyone six months of age and older should get a flu vaccine every season.” Why is the influenza vaccination such a hot topic year after year? Different strains of the flu virus may be prominent each year. An article from the Mayo Clinic says that one of the flu vaccinations available in 2015 contains ingredients that will help to protect recipients from H1N1 as well as two other strains of the disease. A particularly potent vaccine is available for adults over 65 years of age.

Pneumococcal bacteria may cause a variety of afflictions, including ear infections and meningitis, according to the CDC. Pneumococcal vaccines protect against about 90 types of bacteria, and people younger than five years of age and older than 65 years of age should receive a vaccination, says the CDC. Because there are so many types of pneumococcal diseases, suffering from one pneumococcal condition will not protect a person against more infections. This is why the CDC recommends vaccinations for at-risk groups. The CDC also notes that there are different types of pneumococcal vaccines. No one vaccine will protect against all types of pneumococcal bacteria, so patients should consult a medical professional to find out which vaccine best fits their health needs. The most important vaccinations for this year may vary between areas, and different vaccines may be more important for certain groups of people. The above medicines, however, can certainly contribute to better public health in 2015.