COVID-19, or the novel coronavirus, has caused quarantines and lockdowns across the world as public health officials scramble to mitigate a serious public health threat. As many communities start looking at plans for opening back up to protect business and economic concerns, the public health implications of quarantine and the resulting “re-opening” of society must be addressed.

Here is a closer look at the effects of quarantine and what re-opening may mean from a public health perspective.

Why Did States Choose to Go Into Lockdown?

As COVID-19 spread across the country, many states asked residents to stay home, making it more of a lockdown than a true quarantine. The goal of this period of time was two-fold. First, the goal was to slow the spread of the highly contagious virus, because no vaccine or effective treatment has yet been discovered. Second, the goal was to avoid overwhelming the healthcare system with too many people being sick at one time. “Flatten the curve” became the motto of public health officials as they encouraged citizens to do their part and stay home.

Was the Lockdown Effective?

At the start of the pandemic, public health officials recommended strict “stay at home” measures to help keep the new, highly contagious virus from spreading. Three months later, and the same communities that were pushing for quarantine are now pushing for the economy to start opening back up. But were the measures effective?

When COVID-19 first came to America, public health officials warned that, without measures to prevent the spread, the hospital system would quickly become overwhelmed. Based on data out of China and Italy, which has worse outbreaks than the United States at the time, the CDC was warning in March of 2020 that death tolls could reach 1.7 million, and 21 million people could need hospitalization, as the New York Times reported. This is what caused the strong push for lockdowns and “stay home” orders from governors.

By Memorial Day weekend, the death toll was hovering around 100,000 in the country, which is much lower than anticipated. While more time is needed to know if the lockdowns worked, it appears based on numbers alone that asking people to stay home was effective at slowing the spread. Yet now that counties and states are opening, a potential surge could occur.

Public health officials must strike a delicate balance between stopping the spread of COVID-19 and ensuring the stability of their economies. Washington University in St. Louis ran three models to see what would be the most economically advantageous as well as the most health-conscious way to manage the coronavirus over the course of 76 weeks, which is the fastest a potential vaccine could make it to market. The models, published in MedRxiv, were as follows:

The first scenario (with strict quarantine measures) projects a death toll of about 200,000 people and very negative economic implications. In the second model, which released all non-seniors after 40 weeks, the economy remained the strongest, but a second outbreak occurred. This model has a death toll of 700,000 as well as a second quarantine period with more economic struggle. The third scenario, with a slow re-opening, led to about 220,000 deaths, no second outbreak, and slow but steady economic recovery. The researchers decided the third model was the most effective at the dual goal of re-opening, because it protected the economy and kept the death toll in check.

Based on this and other models, the best scenario is to open economies slowly, while maintaining a quarantine of the most vulnerable populations, like seniors. This not only protects the health of communities, but it also protects against the inevitability of another lockdown if the economy opens too quickly. 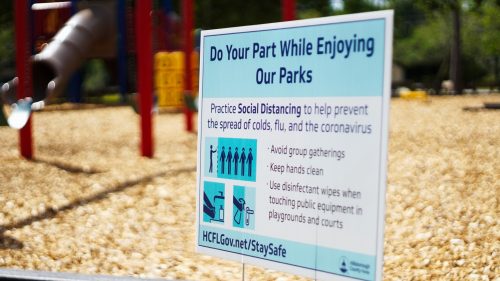 Photo by Jordan Hopkins on Unsplash

Staying in a lockdown endlessly is not a working solution to the pandemic but opening too soon could cause even more problems. This leaves public health officials wondering: what is the right solution?

Each state will need to create its own scenario for re-opening, and those solutions need the help of non-partisan public health officials. Many have created checklists that indicate when it seems wise to open various parts of their economies. While each state is different, some of the items on those checklists may include:

When some or all of these factors are in place, communities can feel confident in fully re-opening. Until they are, public health officials are asking for continued social distancing and other safety measures to remain in place.

The COVID-19 outbreak has driven an on-going public health conversation in the United States and has demonstrated the ever-growing need for new voices in the health industry.

For those interested in joining the public health community, an MPH degree from the Keck School of Medicine of USC can be the first step on a fulfilling career journey.

Quarantine in the 21st Century: To Be Effective, Public Health Policies Must Be Inclusive