Understanding the Implications of Vaping and E-Cigarettes

E-cigarettes are still a relatively new product and have only been around in the United States for just over a decade. The Food and Drug Administration (FDA) and the public health sector are only now beginning to understand the long-term effects of vaping and determine whether or not smokers are actually any better off using e-cigarettes.

E-cigarettes are battery-powered devices that heat a liquid, usually containing nicotine. The nicotine is mixed with the chemicals propylene glycol and glycerin. Most e-cigarettes now also have a flavor, such as apple or cotton candy. The e-cigarettes deliver these chemicals into the body in a vapor form and do not produce any smoke like a traditional cigarette does.

A Rise in Vaping and E-Cigarettes Among Teens 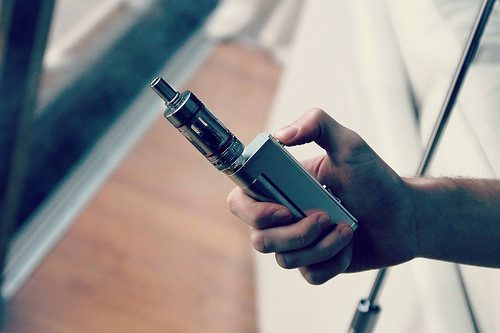 The University of Southern California has conducted several studies in the past 12 years that show a rise in the use of e-cigarettes, particularly among teenagers. The startling results show that teens who would otherwise never have smoked traditional cigarettes are now smoking e-cigarettes.

One study in particular that was published in the journal Pediatrics began surveying high school students in 1995. The same age group was surveyed again in 1998, 2001, 2004, and 2014. The study showed that in 2004, only 9 percent of the surveyed teens were smoking cigarettes. At this time, e-cigarettes were not sold in the United States.

Vaping and E-Cigarettes Are a Gateway to Cigarettes

While the idea of teens smoking e-cigarettes may not seem so serious, research conducted by USC director of Health, Emotion and Addiction Laboratory, Adam Leventhal, has shown that teens who smoke e-cigarettes with a high level of nicotine are more likely to use other nicotine products, such as traditional cigarettes.

There are several different levels of nicotine concentrations sold for e-cigarettes. Smokers can purchase anything from zero mg/mL to 25 mg/mL, where anything over 18 mg/mL is considered high. The USC research conducted shows that for every level-up in nicotine strength that e-cigarette users purchase, users are two times more likely to smoke conventional cigarettes three days or more in a month.

The Health Effects of Vaping and E-Cigarettes

The fact that e-cigarettes are a gateway to traditional cigarettes is a major concern for the public health sector, but it has also become glaringly obvious as more research is conducted on e-cigarettes and their effects, that vaping alone may not be the solution either.

Regardless of whether users are smoking traditional cigarettes or e-cigarettes, nicotine is still being delivered the body. In its concentrated e-liquid form, nicotine is poisonous. Nicotine has been shown to have effects on reproductive health, and when pregnant women are exposed to it, even at low levels, it can harm the developing fetus and lead to babies born with low birth weights. Nicotine has also been shown to be toxic to the still-developing brain of young people. Children who have been exposed to nicotine have more respiratory problems.

Nicotine is a cardiovascular stimulant and has the potential to worsen heart disease in people who have severe heart conditions. As Life Science mentions, there is also evidence that e-cigarettes can have a substantial effect on blood vessels and can increase people’s risk of heart attack.

In addition to high levels of nicotine, e-cigarette liquids also contain Propylene glycol and glycerin, which can irritate the user’s eyes and airways. When heated and vaporized, these ingredients can degrade into formaldehyde and acetaldehyde. Both of these chemicals are carcinogens, although the research is not yet clear on how this exposure over time could lead to cancer.

The Unknown About E-Cigarettes and Vaping

Due to the fact that e-cigarettes have only been on the market for about 10 years in the United States, there are still many unanswered questions about their health effects in the long-term. There have been no studies done on people who have used e-cigarettes for 30 or 40 years. It is still unclear whether or not e-cigarettes will have effects on the heart or lungs or whether they can cause cancer.

According to a review of studies published in the journal Tobacco Control in May 2014, the long-term health effects in people who consume nicotine in a vaporized form are not known. It is also still unknown whether propylene glycol could result in lung problems after decades of using e-cigarettes.

Another unanswered question is what the chemicals in the flavorings are doing to people’s health. According to the American Lung Association, there are over 500 brands selling almost 8,000 flavors of e-cigarettes. It is impossible to know how these will affect people’s health over time.

It is clear that more research needs to be conducted over time on the use and effects of e-cigarettes and vaping. The problem of nicotine use and the rise in young people reaching for traditional cigarettes are issues that the public health system will continue to battle. It is becoming ever more important for the public health sector to educate both teenagers and adults on the risks of consuming nicotine products.

If you’re interested in large scale public health issues like this one, consider furthering your career in public health with a Master of Public Health online degree. Visit the Keck School of Medicine of USC to learn more.